If this week’s NFL Conference Championship matchups are half as thrilling as the Divisional Round games, we’re in for a treat. Here’s our read on what’s in store, and here’s to hoping we get as much of this right as we did last week.

Recent History: We only have to go back to Week 17, when these two teams played an instant classic in Cincinnati. The Chiefs jumped out to a 14-0 lead in the first behind two Patrick Mahomes TD tosses, but the Bengals quickly answered when Joe Burrow hit Ja’Marr Chase in space and he did the rest, taking it 72-yards to the house. KC led 28-17 at the half, but Burrow and Chase connected again on the third play of the second half, this time on a 69-yard bomb giving Chase 3 TDs on the day. Evan McPherson nailed a chip shot field goal as time expired to give the Bengals a 34-31 win and the AFC North title. At the post game handshake, Mahomes said “See y’all in the playoffs.” He was right.

Playoff History: None- The Jaguars and Bengals are the only AFC franchises the Chiefs have never faced in the playoffs. After winning an absolute thriller last week- here’s everything that happened after the two minute warning (you’re welcome)- the Chiefs are hosting their fourth consecutive AFC title game. Since losing an OT heartbreaker to the Pats in 2018, the Chiefs have won the last two AFC Championships in convincing fashion, taking home the ultimate prize in 2019 for the first time in 50 years. The Bengals have won their only two prior AFC Championship appearances- the Giants and Texans are the only other franchises to have never lost a Conference Championship game- but went on to lose both times to Joe Montana’s 49ers.

The Bengals will win if: They come out of the gate hot. The Bengals got away with not doing that back in Week 17, falling behind 14-0 in the game’s first 12 minutes, but there’s no way they’re winning a playoff game in Arrowhead that way. Burrow, Chase, and company need to come out firing on all cylinders to have a chance to keep up this time around.

The Chiefs will win if: They contain Ja’Marr Chase (good luck.) Last week Gabriel Davis- who ranked fifth in receiving yards on his own team in the regular season, mind you- torched the Chiefs secondary for 201 yards and an NFL playoff record 4 TDs. Chase is a much better receiver than Davis and has never been better than he was the first time he faced the Chiefs in Week 17 (11 catches/266 yards/3 TDs.) If KC can keep Chase down in the 100-150 yard range, they’ll be huge favorites to make their third straight Super Bowl appearance.

Best Prop Bet: Tyler Boyd OVER 39.5 yards receiving; Boyd should be very active if the Chiefs focus on Chase as much as we think they will.

Recent History: The 49ers head to SoFi Stadium riding a 6-game head-to-head winning streak against the Rams. In Week 10, the Niners began the game with an 11-minute drive ending with a George Kittle TD and never looked back, winning 31-10. In their Week 18 rematch, the Rams jumped out to a 17-0 lead until Deebo Samuel stepped up to save the 49ers season. The do-it-all wideout racked up 95 receiving yards while rushing for a score AND tossing a 24-yard TD to Jauan Jennings. Robbie Gould’s OT field goal and Ambry Thomas’s subsequent interception completed an improbable 27-24 comeback, and clinched a San Fran playoff berth.

Playoff History: These longtime divisional rivals have only met once in the postseason, with Joe Montana’s 49ers dominating the 1989 NFC Championship 30-3 en route to their fourth Super Bowl win in a 9-year span. Both franchises have made multiple Super Bowls since, each winning one (barely, in the Rams case) but their playoff paths haven’t crossed again until now.

The Rams win if: They make Jimmy Garoppolo beat them with his arm. The run-heavy Niners have called 75 running plays and just 52 passing plays against LA so far this season. If Aaron Donald and the Rams’ defensive line can force San Fran into more passing situations, it’ll bode very well for their chances of becoming the second straight team to play the Super Bowl in their home stadium.

The 49ers win if: They can keep Cooper Kupp under 100 yards, which is something they haven’t done yet this year despite sweeping the season series. They dodged a bullet twice. That’s tough to do a third time. Kupp, the NFL’s Offensive Player of the Year, led receivers in just about everything, including receptions (145), receiving yards (1,947) and receiving touchdowns (16.) San Fran will happily take their chances with OBJ and Tyler Higbee in single coverage to keep Kupp under control.

Best Prop Bet: Garoppolo UNDER 227.5 yards passing; Jimmy G still isn’t 100% and even if he was, the 49ers are likely to keep going run-heavy. 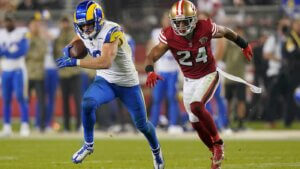