Three of the four games in the NFL Divisional Round are rematches from the regular season.  Lots of questions will be answered.  Can the Bengals win 2 playoff games less than 32 years apart? Will Aaron Rodgers FINALLY make the Niners pay for passing on him in the 2005 NFL Draft?   On to the games…

Recent History: This is the only non-rematch on this weekend’s playoff slate. The last time these teams met was in Week 8 of the 2020 season when the Bengals beat the Titans 31-20. Derrick Henry racked up 118 yards and a TD, but only got the ball 18 times after Tennessee fell behind early on a pair of Bengals TD runs (by people not named Joe Mixon, for a change.) Joe Burrow and Ryan Tannehill were both solid if unspectacular.

Playoff History: The franchises’ only playoff meeting was a Wild Card matchup back in 1990, when the Bengals crushed the (then) Houston Oilers 41-14. The Bengals went on to end Bo Jackson’s NFL career the next weekend in Los Angeles, and the football gods punished them by not letting them win another playoff game until last week (against those same Raiders, ironically.) 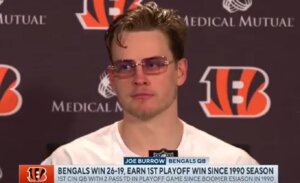 The Bengals win if: Their defensive line holds up. Cincy is without DT Larry Ogunjobi, who is headed to season-ending IR. If Derrick Henry is healthy, look out.  Tennessee can control the clock as they have the ultimate game manager in Ryan Tannehill under center.  Burrow and Chase can only make plays if they have the ball.

The Titans win if: Derrick Henry plays like Derrick Henry. He’s truly the X Factor in this game since he hasn’t played since week 8 (although he still finished 9th in rushing).

Recent History: The Packers beat the 49ers in an instant classic all the way back in Week 3. The Pack jumped out to a 17-0 lead but the 49ers roared back to take the lead with just 37 seconds left, only to fall short on Mason Crosby’s 51-yard field goal as time expired. The game proved to be a huge turning point for both teams- The 49ers would go on to lose 5 of 6 and needed overtime in Week 18 just to make the playoffs, while Aaron Rodgers (who gave us all an epic fist pump right before that field goal) only lost one game the rest of the season.

Playoff History: The franchises have split a pair of NFC Championships, with the 49ers beating the Packers 37-20 in 2019, and the Packers winning 23-10 back in 1997. The Packers actually knocked the 49ers out of the playoffs three straight years from 1995 to 1997, and came reaaaaaally close to doing it a fourth straight time until this happened (btw- how great do Madden and Summerall sound in that clip?)

Bonus History: “With the first selection in the 2005 NFL Draft the 49ers select… Alex Smith.” Make sure you keep watching for the reaction of the heartbroken (and clean-shaven) Bay Area kid who ended up having to sit around for 23 more agonizing picks before the Packers finally called.

The Packers win if: Aaron Rodgers does Aaron Rodgers things, the frigid conditions (gametime temperature is projected to be a balmy 12 degrees) stifle Jimmy G and his injured thumb, and Rasul Douglas comes up with one more big interception.

The 49ers win if: George Kittle breaks free early and often, Deebo Samuel strikes for one big play, and their secondary yields fewer than 250 passing yards for the sixth consecutive week.

Recent History: The Rams won a battle of unbeatens back in Week 3, 34-24. Tom Brady shredded the Rams defense, completing 41 passes for 432 yards and a TD. But the Bucs couldn’t run the ball at all, and Matthew Stafford (27-38/343 yards/4 TDs) was every bit as impressive as Brady and the Rams won going away. At the time the matchup had all the feel of a battle for the top spot in the NFC, but the next week Arizona won 37-20 in LA and eventually the Packers surpassed all three teams to earn last week’s bye.

Playoff History: The Rams swept a pair of low-scoring NFC Championships, first shutting out the first non-terrible Bucs team in franchise history 9-0 back in 1979 (future Super Bowl MVP Doug Williams went 2-13 for just 12 yards in that one, despite rocking the old creamsicle uniform) 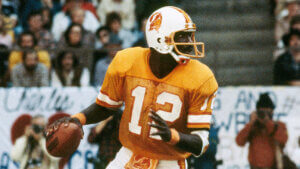 and then beating the Warren Sapp & Derrick Brooks-led Bucs 11-6 in 1999, aided by a late controversial call which led to the creation of the Bert Emanuel rule.

The Bucs win if: Brady continues to not care which of his targets are healthy, and their defense manages to keep Cooper Kupp under 100 yards.

Recent History: In week 5, the Bills marched into Arrowhead and completely picked apart Mahomes’ crew 38-20 thanks to Josh Allen lasers like this to Emmanuel Sanders. Mahomes and the Chiefs trailed most of the game, throwing 54 times. A Micah Hyde pick-six ended any hopes of a KC comeback. Now, Allen and Buffalo are playing even better after their “perfect” wildcard win over New England where they scored TDs on 7 consecutive possessions. The Chiefs are feeling it too, easily dismantling the Steelers last week.

Playoff History:  In last year’s AFC Championship Game the Bills quickly took control. A 51-yard field goal, muffed punt recovery and Dawson Knox TD put Buffalo up 9-0 only eight minutes in. That’s when Mahomes took over, leading three consecutive touchdown drives by scrambling, extending the play and finding the open man. KC took a 21-12 lead into halftime and never looked back. Tack on a couple of 2nd half Travis Kelce touchdowns, and the Chiefs headed to the Super Bowl with a 38-24 win, avenging their 1993 AFC Championship loss in Buffalo. 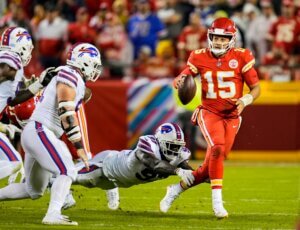 The Bills win if: Josh Allen plays like he did against New England.  If Allen is 80% of the quarterback he was last week, the Bills could wind up in the AFC Championship game for consecutive years. This isn’t rocket science, but it is a rocket arm. 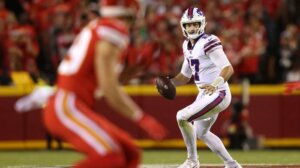 The Chiefs win if: Travis Kelce has over 100 receiving yards and two TDs. Bold? Yes. Specific? Yes. However, Kelce has six 100-yard games in his playoff career. As good as Mahomes is, the path to the AFC Championship is literally in Kelce’s hands.