In a tradition which dates back all the way to 1934, the Lions play shitty football on a Thursday instead of a Sunday in order to receive thanks from their opponents. Or maybe the pilgrims, it’s hard to keep track. Detroit strikes first on this impressive back foot heave from Jared Goff to Josh Reynolds, and also offers up the rarely seen orchestrated celebration of a touchback, only to find themselves down 13-7 at the half. They retake the lead late in the 3rd on this T.J. Hockenson TD, and their first 4th quarter drive gets off to a promising start until three straight penalties turn a 2nd & 7 near midfield into a 2nd & 32 very far from midfield. Two plays later Detroit has to punt and never gets the ball back, as Andy Dalton and the Bears run out the clock with an 8:30 drive culminating in a game-winning Cairo Santos chip shot, as the Lions lose on a game-ending field goal for the third time in their miserable season.

Just four days after a pair of uninspiring losses to the Bengals and Chiefs, respectively, the Raiders and Cowboys put on a wildly entertaining (and exceptionally long and penalty-filled) affair, earning the largest NFL regular season TV audience since 1990 in the process. New Raider DeSean Jackson gets the festivities started with this catch-and-run which makes you wonder why the Rams released him. The Raiders eventually extend the lead to 11 twice, but the Cowboys shrink that gap both times (as fast as humanly possible the second time.) Dak, playing without his two best receivers, eventually gets the Cowboys all the way even on this perfectly placed seam throw to Dalton Schultz and subsequent two-point conversion (also to Schultz.) After the teams exchange field goals inside the two-minute warning, we all get treated to just the sixth overtime game in Thanksgiving history. And although it takes 4 snaps, Daniel Carlson eventually gives Vegas the win they so desperately needed.

Buffalo bounces back from last week’s humiliating beatdown against Indy with a big win in the Big Easy. With Alvin Kamara and Mark Ingram both out, the Bills yield just 44 yards on the ground a week after being torched by Jonathan Taylor and company to the tune of 264 yards.  The Saints’ defense keeps them in the game for a while, aided by a pair of Josh Allen interceptions, including the first red zone pick of his regular season career on an incredible diving catch by Kwon Alexander. But Allen atones and then some with 4 TD passes including a pair to Dawson Knox, the second of which gives the Bills a 24-0 lead and they pretty much just operate on cruise control from there.

The best inter conference matchup of the day lives up to every expectation. Carson Wentz hits the 300 yard mark for just the second time all season as the red-hot Colts race out to a 24-14 halftime lead highlighted by Ashton Dulin’s first career TD. But the Bucs force a pair of 3rd quarter turnovers, including this gem of a downfield solo coverage interception by Antoine Winfield Jr. and convert both into TDs to retake the lead. Jonathan Taylor ties the game up late by overpowering Winfield at the goal line. But Leonard Fournette (4 TDs) breaks the hearts of the home crowd by hitting the hole with steam and running for 28 yards when he only needed about 5 to put the game away.

In another marquee matchup…just kidding, and man that’s a joke we could have used on a few early games this week. Zach Wilson comes back just in time, with Joe Flacco and The White Lotus both unavailable due to Covid protocols. The Texans, fresh off their upset in Tennessee, take an early 14-3 lead on this 40-yard Brandin Cooks TD. But Houston only manages 65 total yards and 0 points from that point forward. Wilson is mediocre at best (14-24/145 Yards/1 terrible interception) but does manage to pull the Jets ahead 18-14 with some fancy footwork to cap off the first drive of the second half, and Houston never really threatens again.

The Eagles become just the third team since 1985 to rush for over 175 yards in five straight games, but can’t do much of anything in the air, as Jalen Hurts goes just 14/31 for 129 yards and 3 picks, including this horrible decision at the end of the first half which deprives the Eagles of 3 points they really could have used later. Chris Myarick extends the lead to 10 with your classic perfect route/awful drop/miraculous knee catch.

The Giants spend most of the rest of the afternoon hanging on for dear life, but manage to escape thanks to a late Boston Scott fumble and an even later Jalen Reagor drop. And believe it or not the 4-7 Giants are now just a game out of a playoff spot.

Pouring one out for the Camback (RIP- 11/14/2021-11/28/2021.) And how ironic that it ends with this almost perfect mirror image of the way it began. Yes, we know the Panthers are (very) mathematically alive, but with the Patriots version of Cam returning (5-21/92 Yards/2 Int; Yikes,) Christian McCaffrey out for the season, and 3 games left against the Bills and Bucs, things are looking extremely dire in Charlotte. As for the home team, Duke Riley comes onto the field just in time to block Carolina’s first punt of the day and give the Dolphins an early lead. Tua completes over 80% of his passes for the second straight week, and Jaylen Waddle (9 Catches/137 Yards/TD) continues to amaze and, well, waddle as he gives the surging Dolphins the lead for good midway through the second quarter.

Unheralded running backs D’Onta Foreman and Dontrell Hilliard, neither of whom had ever rushed for more than 37 yards in a game, both break the 100-yard mark against the Patriots, with Hilliard gaining more than half of his 131 yards on this burst. But not much of anything else goes right for the injury-ravaged Titans. Ryan Tannehill only passes for 93 yards, and the Patriots come up with 4 takeaways on the afternoon. The last of those takeaways- J.C. Jackson’s AFC-leading 7th pick of the season– effectively puts the game out of reach. On the other side of the ball, Mac Jones continues to impress, putting up the second 300-yard game of his young career. Jakobi Meyers continues to catch everything but touchdowns. And the Patriots play mistake-free ball to hold onto first place in the AFC East ahead of next Monday’s big trip to Buffalo.

The only team to post a margin of more than 10 points against the Steelers (in either direction) has now done so twice, as the Bengals build on their Week 2 win by blowing Pittsburgh out in the rematch. Joe Burrow calls his own number to cap off an impressive opening drive. Tee Higgins goes up the ladder to double the Bengals’ lead, and a few minutes later Mike Hilton doubles it again with a pick-six against his former team. The Bengals don’t have any games left against sub-.500 teams, but if they keep playing the way they have these last two weeks that may not matter all that much.

Cordarrelle Patterson, in whose absence the Falcons were outscored 51-0, returns in style with a pair of first half TDs- first diving for the pylon and then bursting up the middle. Marvin Jones Jr. makes one of the best catches of the season just inside the two-minute warning, but Jacksonville only gets a field goal for the effort. The Falcons eventually take an 18-point lead but take their foot off the gas as per local custom, giving Trevor Lawrence one last chance to be a hero. But Lawrence fails to get the Jags past their own 29, and Atlanta escapes with the 21-14 victory.

Denver becomes the 9th team in 11 tries to rush for over 100 yards against the NFL’s worst run defense. Javonte Williams gives the Broncos a 14-0 lead on this 3rd & Goal draw. With Teddy Bridgewater temporarily sidelined, Derwin James gives his team some life with a full extension interception near midfield and the Chargers capitalize with a 12-yard Austin Ekeler TD reception. L.A. proceeds to dominate the 3rd quarter everywhere except the scoreboard, limiting Denver’s offense to a single 3-and-out. But Pat Surtain’s first interception preserves Denver’s 14-7 lead on the first play of the 4th quarter, and his second interception goes all the way back to put the game on ice. Both teams now sit at 6-5 alongside the Raiders, all just a half game behind the Chiefs.

Covid Toe? What Covid Toe? Research aficionado Aaron Rodgers and the Packers remain unbeaten at home and improve to 9-3 overall with a shootout victory over the increasingly mortal Rams. Cooper Kupp goes over the 90-yard mark for the 10th time in 11 games this season, but so do Davante Adams and Randall Cobb, the only one of the three to find his way into the endzone. The Rams keep pace for a while but the wheels completely fall off in a 16-0 third quarter which includes free points from both a muffed punt and this Malcolm Butleresque interception by Rasul Douglas to put the Packers up 36-17. Los Angeles answers with OBJ’s first TD in 12 games, but they don’t get any closer than that until the game’s final seconds.

For the third straight week the 49ers hold the ball for over 37 minutes, establish a new season high in rushing yards (208), and look a lot more like the team that started the year as a trendy sleeper pick than the one who lost 5 of 6 at one point. Nominal wide receiver Deebo Samuel continues to do his best Cordarrelle Patterson impersonation, rushing for a pair of TDs before exiting with a groin injury late in the 3rd quarter. Kene Nwangwu keeps Minnesota in the game with this 99-yard kickoff return but Dalvin Cook dislocates his shoulder and subsequently fumbles on the Vikings’ next play from scrimmage. Minnesota makes one more push in Cook’s absence, but has to burn a crucial timeout after Kirk Cousins forgets which lineman has the ball (hint: it’s not the one in the circle) and never makes it back to the red zone after failing to convert post-timeout. 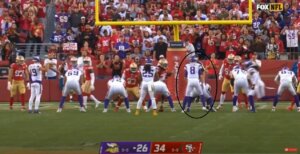 For the 6th time this season the Ravens win by less than a touchdown, this time despite 4 interceptions from Lamar Jackson. Baltimore’s defense completely shuts down Cleveland’s biggest strength, limiting Nick Chubb and Kareem Hunt to just 36 combined rushing yards. Neither team moves or even holds onto the ball well; The second quarter alone features 5 turnovers- here’s a supercut of all 5 of them. Both teams finally find the endzone in the 3rd quarter, with David Njoku barely scooping up this low throw from Baker Mayfield to get the Browns back within 3. But Cleveland never makes it past their own 41 over the course of their last 3 possessions, as Baltimore holds on for the 16-10 win and is now all alone as the only 3-loss team in the AFC.

Russell Wilson might not be able to save the Seahawks this time. With the exception of their Week 8 win against Jacksonville, Seattle hasn’t scored more than 20 points since Week 4, and their defense just hasn’t been good enough to win games that way. J.D. McKissic scores a pair of TDs before exiting with an apparent concussion. The first of those TDs gives Washington the lead for just one (untimed) snap as Seattle becomes just the second team in NFL history to score 2 points while defending an extra point attempt after blocking Joey Slye’s kick– they say you can take the Blewitt out of Washington, but you can’t take the Washington out of Blewitt. But the 2nd McKissic TD gives Washington the lead for good. Seattle almost ties it when Washington inexplicably leaves Freddie Swain wide open down the middle in the game’s closing seconds, but Kendall Fuller snags Wilson’s two-point attempt throw at the absolute peak of his jump to seal the win.