After trading early TDs the Bucs pull ahead for good when the Eagles give Brady literally all day to find Antonio Brown late in the 1st quarter. Jalen Hurts leads the Eagles most of the way back from 28-7 for a surprising cover despite putting up an awful 55.8 QBR, but never gets the ball back as the Bucs run out the last 5:54 on a 12-play 52-yard drive in Zach Ertz’s farewell game.

A week after inflicting the Falcons and Jets (2-6 combined) on the British, we dial the torture up a bit with the Jags and Dolphins working a combined 1-9 record. Tua impresses in his first full game since Week 1 (33/47; 329 yds; 2 TD) but also throws one of the worst interceptions you’ll ever see. The Jags come up with a huge 4th down stop late and convert an equally huge 4th down just in the nick of time to get their first win since Week 1 of the 2020 season. Urban Meyer is presumably still celebrating somewhere.

Washington takes a surprising 13-10 halftime lead when the Chiefs defense does that weird thing where they don’t guard anyone. Seriously. Check out this still from that play: 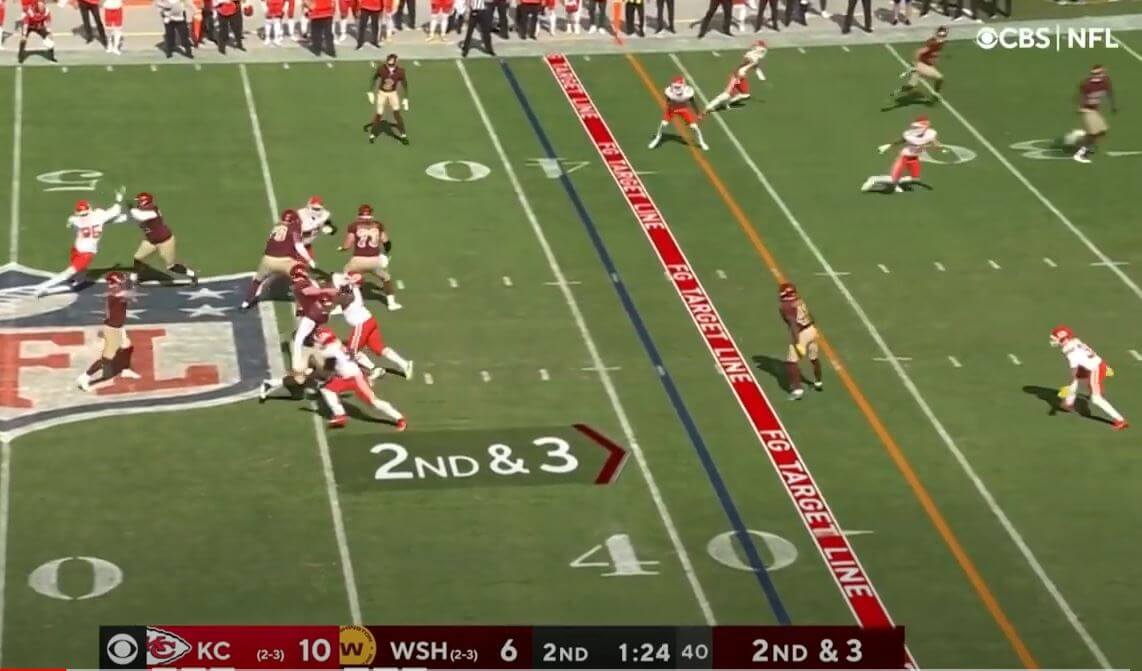 But the Chiefs win the second half 21-0, best symbolized by yet another Patrick Mahomes-Tyreek Hill video game play (which didn’t actually count due to offsetting penalties, but had a Game Over feel nonetheless) to get back within a game of 1st place in the AFC West.

T.Y. Hilton returns, Jonathan Taylor has a huge day highlighted by this 83-yard burst, and the suddenly resurgent Colts are right back in contention in the (awful) AFC South. The Texans, for their part, stay ahead of the Giants in the race for the #1 pick but still trail the Eagles (who have the Dolphins’ pick,) the Jags (whom they foolishly beat way back in Week 1,) and, of course…

…ah, the Lions. Tired of losing on last-second field goals Detroit avoids that fate by falling behind 27-0 after 3 quarters and putting up just 95 yards in the process. Joe Mixon runs all over the Lions’ defense and the Bengals will get to battle for first place next week in Baltimore. And no, this one wasn’t a Scorigami, but it was close, and perhaps Lions fans’ can take some comfort in the fact that the only other 34-11 loss in NFL history helped the Colts get Peyton Manning.

Aaron Rodgers claims to still own the Bears and, well, he kind of has a point through 26 shots at the NFL’s oldest rivalry:

The Bears’ replacement replacement RB Khalil Herbert (21 touches/112 yards/first career TD) stunningly puts more points on the board than his long-lost cousin Justin, but the rest of his team only amasses 165 yards as the Pack take their customary stranglehold of the NFC North.

Turns out Lamar is actually the one to bring balance to the AFC. The Ravens, having listened to Brandon Staley’s excellent explanation of the importance of the running game, outgain the Chargers 187-26 on the ground, highlighted by this perfectly executed option to close out the scoring. And with the Bills’ Monday night loss, Baltimore is now the only 1-loss AFC team.

The Vikings get Dalvin Cook back and celebrate by putting up an NFL season-high 571 yards, but being the Vikings they also gift the Panthers 10 points on special teams (this punt block and a missed 50-yard FG which would have extended the lead to 31-18) to keep things interesting. Sam Darnold takes advantage by leading a 96-yard game-tying drive starting with this perfect clutch throw and for the second time this season the Vikings miss a potential game-winning FG at the end of regulation. Luckily for the Vikings they end up not needing their kicking game in OT.

Upon seeing the news that Kliff Kingsbury and Chandler Jones would not be making the trip to Cleveland, the ‘72 Dolphins looked poised to enjoy their annual champagne toast, but that toast was emphatically not in the Cards. Arizona holds the Browns to just 73 yards rushing (less than half of their previous low of 153) and 14 points (half of which come on this Hail Mary.) And the Browns defense can’t tackle or guard DeAndre Hopkins as the Cardinals improve to 6-0 with another impressive road win.

The Raiders rebound from a brutal stretch both on and off the field to get back into the win column. Vegas scores more points on Henry Ruggs’ latest trick than they had in the first halves of their last two games combined. Derek Carr and Teddy Bridgewater both throw for over 300 yards, but Bridgewater turns the ball over 4 times (most egregiously here) which ends up making the difference.

Much like the Vikings, the Cowboys put up a zillion yards, including an NFL season-high 445 yards passing but shoot themselves in the foot several times to keep the game close. First Dak tosses in an interception and a fumble in the Pats’ end zone. Then the Cowboys celebrate their go-ahead pick-six exactly one play too long and have to scramble just to force OT. The Pats get the ball first in OT but never get it back after punting as Dak connects with CeeDee Lamb to give the Cowboys a three game lead in the NFC East and drop the Pats to 0-4 at home this season.

For the second straight week Geno Smith almost pulls off an improbable 2nd half comeback as the Seahawks recover from an awful first half (0 points, 3 first downs) to tie things up twice in the 4th quarter (somewhat controversially the second time). But after trading punts in OT T.J. Watt reminds everyone why the Steelers gave him all that money and Pittsburgh wins their second straight to get back to .500.

Week 6 saved its best for last. The Bills make two early Red Zone trips and hold the Titans to one first down in their first 3 drives, but suddenly find themselves behind when both of those Red Zone trips end in Field Goals and the Titans’ 4th drive starts and ends like this, the first of 7 lead changes on the night. The Titans’ passing game struggles despite getting A.J. Brown and Julio Jones back- the latter only briefly, but he did give us this crazy catch before re-injuring his hamstring. Derrick Henry’s 3rd rushing TD of the night gives the Titans a late 34-31 lead which they almost blow immediately. But thanks to a holding penalty on that return, and a pair of clutch stops of Josh Allen on both 3rd and 4th down in the final minute, the Titans hold on for the 34-31 victory.