Hello Chuckleheads! Our second full month of Chuckle is in the books and our MVP is… you!! We saw a 60% increase in Chuckle gameplay from July to August. We can’t thank you enough and please keep up the great work in spreading the word about our little game!

On to the August highlights:

Alright, that’s a little harsh to Matt Ryan and more than a little generous to the Pistons, but for what it’s worth, 2016 was:

Fun fact (unless you’re from Detroit)- The Pistons, Lions, Tigers, and Red Wings all finished above .500 in 2016. Those four franchises have collectively had just one winning season since (The 2017 Lions went 9-7 but missed the playoffs.)

Who are “three players who were drafted by different franchises than you think?” (Yes, apparently we’re still doing this Jeopardy thing.)

Middleton was drafted by the Pistons but traded to the Bucks after his rookie year. They… probably shouldn’t have done that.

And as we covered in the Cousy game, Red Auerbach passed over Cousy in his first draft with the Celtics, only to end up with him anyway after the Chicago Stags dispersal draft. They eventually made up over cigars (okay, they actually made up way before this, but I needed an excuse to share this picture.) 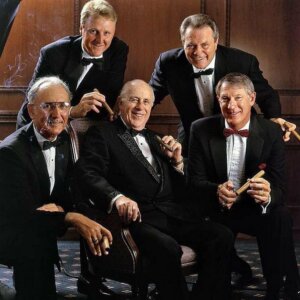 1. We have won 11 championships, second most in our league’s history

26% of you came up with the St. Louis Cardinals right off the bat.

2. We tied a franchise record with 56 wins this past season

40% of you knew that the Memphis Grizzlies haven’t had a ton of success, but the future is looking up.

74% of you got Frank Gore from this. It’s still crazy that Gore is the 3rd leading rusher in NFL history, right?

4. I once used the word “practice” 14 times in a single press conference answer 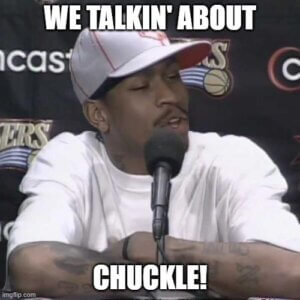 5. My first and last name are both last names of retired Atlanta Braves (#44 & #10, respectively)

Was glad to see 60% of you get Aaron Jones from one of my favorite clues of the month.

6. My first two sons are named Cooper and Peyton

80% of you have watched a football game with the sound on at some point over the last 23 years and got Archie Manning just in the nick of time.

Who are “guys who won both their only MVP and their only conference title in the same season?”

We always love it when a fellow Chuck gets mentioned, and it would have been an amazing story if Charles Barkley had won his only NBA Finals ring at (checks notes) 54 years old.

The Z’s are silent. And hidden.

3. (Andrew Luck, Question 6: 2018 also ended up being my last season. I surprised many by retiring during the 2019 preseason while I was still just 29 years old)

Now there’s a guy I hadn’t thought about in a long time. Partly because Thurl Bailey was twice Andrew Luck’s age during the 2019 NFL Preseason. And partly because his biggest sports moment happened nearly 40 years ago (he’s the guy holding the ball at the start of this clip.)

Thanks to all for playing along, and looking forward to many more Chuckles in September! And of course if you haven’t played today’s game yet, there’s still time to get your Chuckle on!