Hello Chuckleheads!! As a thank-you to our earliest adopters we wanted to share some highlights from our first full month of Chuckle!

Games with the highest winning percentage:

So… apparently you guys know a lot about Tracy McGrady:

Favorite facts we bet most people didn’t know (because we didn’t ourselves until we wrote these games!)

Games with the lowest winning percentage:

We were really hoping someone would tell us they saw Walter Johnson pitch, but to be fair it’s been a while now: 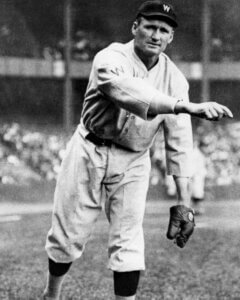 Most helpful clues (by clue number)

1. I went to Virginia Tech

A whopping 69% of you got Michael Vick from just those five words. Wow.

2. (We have never won a championship) Though six seasons ago we came within a minute of changing that.

44% of you correctly guessed the Atlanta Falcons

3. We drafted both Deion Sanders and Brett Favre

66% of you saved par by going with Reggie Miller here.

BTW- The par reference is because some folks have started engaging in some friendly competition around Chuckle where each game is a Par 4. Suffice it to say we enthusiastically endorse this.

5. Our team nickname was inspired by the movie, “Jurassic Park”

Oh yeah, that’s how so many of you got the Raptors!

70% of you have thought about the Caped Crusader a lot more recently than the 2000s Colts, but luckily we had your back and helped you remember Reggie Wayne.

So you guys are really into the NFC and not that into success. Got it.

Sure, this person doesn’t exist, but Tom Gordon’s been retired for a while now, so maybe it’s time for another Flash?

3. (Roger Maris, Question 2: I won my only two MVP awards for my first two seasons in New York)

There’s a lot to love about this one. Yao Ming never had a top 10 MVP finish and never played in New York. Willis Reed is the only Knick ever to win an MVP. And the “Z” is a particularly nice touch.

Thanks to all for playing Chuckle. We’re pumped for what’s ahead and we’d love it if you could help us spread the word! Share your Chuckle results wherever you like. Text them to your friends. Tweet them. Post them to Facebook. Print them up and mail them if that’s your thing. And of course if you haven’t played today’s game yet, there’s still time to get your Chuckle on!