Hello Chuckleheads, hope you’re all enjoying this rare sports equinox! All eight leagues in our app (latest version here) have games scheduled within three days of this post.

October was our fourth straight record month and also established a new overall win rate record (91.4%.) You guys have gotten pretty good at this! Here are the latest monthly highlights:

Both Shaq and the Big Red Machine were notably larger than life, so no major surprises there, but I was extremely impressed that so many of you got Steve Largent. Not bad for an 8th round pick who couldn’t make the (decidedly mediocre) 1976 Houston Oilers.

Now you might be asking yourself how that’s possible given that Wilt Chamberlain and Bill Russell both averaged over 20 Rebounds Per Game for their entire careers, and you… would definitely have a point. Except that no one kept official stats on Offensive vs. Defensive Rebounds until 1973-74, by which time both of those guys had retired.

Bonus fun fact: If you include ABA stats, Artis Gilmore finished 61 Defensive Rebounds ahead of Garnett and (unofficially) had more hair than everyone else in the top 12 combined.

2. Dirk Nowitzki, Kobe Bryant, and Karl Malone are the only players in NBA history to score over 30,000 points for a single franchise.

3. Every member of the Big Red Machine made the 1976 All-Star Game except for CF Cesar Geronimo, and even he had a 125 OPS+.

33 All-Star Games, 18 Gold Gloves, and 2 World Series MVPs between these three guys, but they still played harder than all of the other October Chuckles.

34% of you correctly guessed that we were looking for longtime Ram Aaron Donald rather than someone who had played for multiple franchises. Bonus fact- Donald and Tackle Rob Havenstein are the only remaining St. Louis Rams draft picks still with the franchise.

2. I also played my first 11+ professional seasons in Georgia despite having been drafted by Utah.

63% of you got Dominique Wilkins from this one. Obviously the Utah mention gave away a lot of information but we figured most folks would have just assumed that the longtime face of the Hawks had been there from Day 1. That trade also makes for a fascinating “what if”- does a team of Dominique, Stockton, and Malone take over the West instead of the Blazers when Showtime finally ends?

“Where have you gone, Joe DiMaggio? A nation turns its lonely eyes to you. Woo, woo, woo.”

66% of you were able to name that tune. And sorry for getting that second one stuck in your head. Again.

4. I started and ended my career in Minnesota.

Not sure how many people actually remember that Kevin Garnett went back and finished his career where he had started, but between this clue and the Defensive Rebound bit earlier, 73% of you got this one for par.

72% of you knew that it was Julio Jones down by the schoolyard.

6. George Brett is our all-time leader in Singles, Doubles, Triples, and Home Runs (and a whole bunch of other categories.)

What else do I have to say, I didn’t want people to lose on a Friday. 91% of those who hadn’t named the Kansas City Royals yet correctly did so here.

Some inside Chuckle baseball (or basketball, I suppose)- we wrote the Draymond game just a few days before he punched Jordan Poole, and were monitoring the story with bated breath in case we needed to make any last-minute changes, but thankfully cooler heads prevailed. It’s also pretty wild that Draymond, a four-time All-Star and four-time NBA Champion, has never averaged more than 14.0 PPG.

Well no, of course, but in an impressive coincidence, Barry Sanders was born within a month of Mrs. Robinson’s run at the top of the charts, and We Didn’t Start the Fire hit number one during his rookie season.

2. (Washington Wizards, Question 3: We made the playoffs every season during the 1970s.)

The Nets played exactly two NBA playoff games during the 1970s, losing both. Now this answer isn’t nearly as bad as it sounds- the Nets made the ABA playoffs every year from 1970-1976 and won two titles. But they only won one playoff series in the 25 seasons after this guy took his talents to Philly: 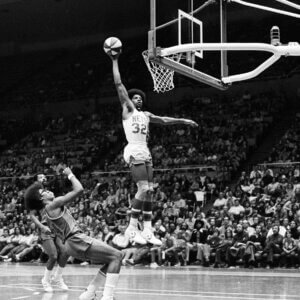 3. (Richard Dent, Question 2: I played my first 11 seasons in Chicago before bouncing around over my last four seasons)

Quick show of hands- Raise your hand if you remember Byron Scott as a Bull. Yeah, looks like it’s just that one guy. Though to be fair I do this for a living and had no recollection of this happening, so you never know: 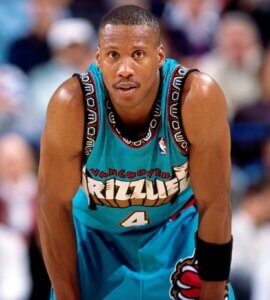 Alright, well I don’t think we can top Byron Scott in a Grizzlies’ jersey so we should probably stop there… hang on, I’m being told we have one more glorious picture of Artis Gilmore’s hair. So we’ll leave you with that. Until next month… 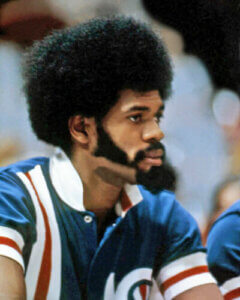